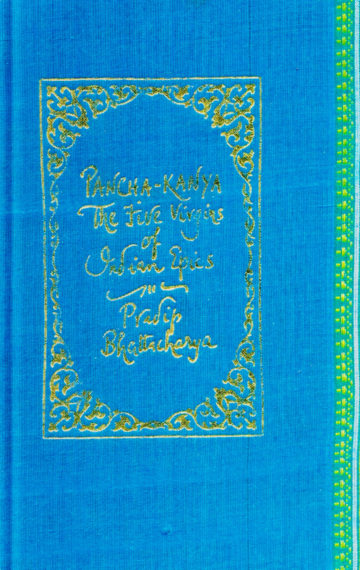 The ancient exhortation celebrating the five maidens as prataha smaraniya urging that they be invoked at dawn in a traditional saying that is an enigma. It raises puzzling questions that have no simple answers. These five maidens are not virgins in the literal sense of the word. Why then are they referred to as kanya and not nari. Each of the five has an extramarital relationship or more than one husband. Why then are they extolled as redemptive?

Pradip Bhattacharya is one of those intrepid scholars who also happen to be bureaucrats… Pradip has been exploring the Mahabharata tradition with enviable tenacity…. (it) is a mine of information… Pradip has taken up a cosmic canvas for his portraiture.  His erudition lies in the ability to pick up a few intelligible details, send questions flying at himself, and seek answers from the reader…..  Pradip’s approach is a feminist’s delight…Pradip’s account is sublime because the subject is sublime…In this wonderful chapter bringing together Vyasa with a good deal of latter-day recreations of Draupadi’s personality… Though Pancha-Kanya seems to be a slim monograph, it expands to Trivikraman proportions as we ruminate on the past sorrows, trials, triumphs of these five heroines…As Pradip says in conclusion:  “The past does indeed hold the future in its womb.” It has been a great adventure … discovering new leads It is a wonderful package…prepared, and I will be coming to it again now and then, I am sure.— Dr. Prema Nandakumar, The Hindu

(It) is anything but a simple analysis. It is unique as the first elaborate study of the two epics seen through the lens of a popular exhortation, whose source is elusive. It also posits a feminist perspective in the male dominated literary world of South Asia. Bhattacharya incorporates unorthodox scholarship in conjunction with orthodox scholarship, with the text poised at the cutting edge of Internet research…. It is this feminist “eye” that sets Bhattacharya’s analysis apart from most academic scholarship…. The analysis of the characters of non-Aryan Tars and Mandodari as strategists, politicians, visionaries, and no simple helpmates to their male consorts is brilliant and convincing….he displays his ability to “twist the plot” and throw the reader off-center while making him or her a partner in this “quest for meaning.”… The analyses again center around the duo as powerful females, as creators of their own destinies, independent of any male partners…. This slim volume is packed with information, references, and data, stemming from the ancient texts to modern revisitations in literature and performance studies. It is invaluable in its tested appeal for both undergraduate students and scholars. It is concise yet exhaustive. It is diverse as opposed to monolithic in its imaging of South Asian womanhood. And, finally, it engages a dialogue between past literature and present scholarship.— Dr. Ratna Roy, International Journal of Hindu Studies, 10 (3), 2006.

The book is a beauty: it is hand-produced, with calligraphed trimmings, and the hardback is bound in patterned sarī cloth…. Many female epic characters are discussed in addition to the five, and mention is made of similar characters in other world mythology and literature. Overall the interested reader will feel that many fascinating issues have been raised… By the end, the book has become a dissertation on the kanyā concept rather than an inquiry into the śloka…Distributed throughout the book are thirty small black-and-white illustrations, including representations of Indian sculpture and painting from various regions and periods up to the present day. These pictures serve to emphasise one of Bhattacharya’s most central and well-made points, the cultural importance of the kanyās.— Dr. Simon Brodbeck, SOAS, South Asia Research, volume 26 issue 1 (February 2006).

“…a deeply engrossing and scholarly study…impeccable analysis… He brings about an effective fusion of the past and the present in his dextrous analysis of feminine psychology… He displays great fluidity of style, as he moves back and forth in time… the author encourages in the reader a spirit of inquiry, and leaves much of his observations to the interpretation of the reader, thus making the latter an active and creative participant in the development of his analysis… Panchakanya imparts a new dimension to post-colonial intellectual literature in English, in which the author relates historical and mythological facts to contemporary literature, theatre and modern feminist and psychoanalytic theories, thereby bringing out the richness of Indian feminism and cultural heritage.”—Dr. Ralla Guha Niyogi in Jadavpur University Essays and Studies, Kolkata, Vol. XIX–XX, 2005- 06.

Get the Book Here –> Pancha Kanya: the five virgins of India’s Epics